Premiere of The Visitor

Finally rested up after an amazing weekend of filming and waiting to hear the results of the judging, the Googz & Co. team eagerly awaited the advance post on the official page for the 48 Hour Horror Film Project. 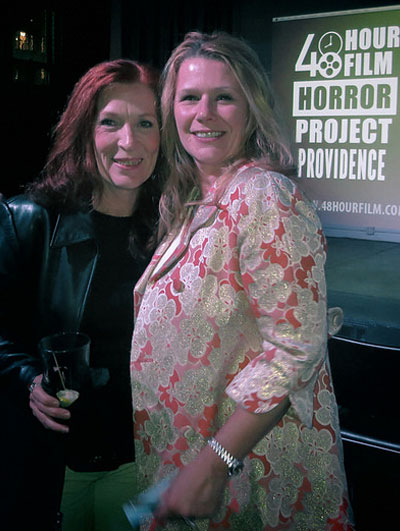 It was a phone call to Diana from one of the actresses, Sissy O’Hara, letting her know the 48 Hour Film Project had posted a list of award winning teams and that Googz & Co. had made the list. Word quickly spread and the team made plans to all meet at the awards ceremony held in downtown Providence, Rhode Island.

Once the exciting evening arrived and the team watched all the movies it was clear that the competition was fierce. The team knew they had a great story, but the level of creativity from all of the teams, each under that same strict 48 hour limitations, was positively inspirational.

When The Visitor finally hit the screen it was an unbelievable feeling to hear the crowd get into the story. It was great for the team to experience the hoped for reaction when a collective jump of fear filled the room. The round of sincere applause made the entire grueling process well worth it.

Of the 18 teams in the film festival only a select few were given awards. The awards ranged from best costumes to best picture and the Googz & Co. team was just excited to be acknowledged for their first time festival hard work. A few trophies were handed out when the team finally heard “and the best music goes to…The Visitor” and what a great feeling that was. Thinking that was the only award everyone was surprised when, near the ceremony end, the team heard “the best film runner up goes to…The Visitor” and that was even better feeling! What an honor to be considered one of the best films at a film festival filled with other talented teams and great films.

Now we want to hear what you think about our debut horror film, so please enjoy watching it here and then comment below.